Radiotherapy, or radiation therapy, refers to the use of ionizing radiation usually for the treatment of malignant tumors and occasionally selected benign diseases. Radiotherapy can be categorized into several different forms:

How does systemic radiotherapy work?

Systemic radionuclide therapy is a form of radiotherapy that involves administering the source of the radiation into the patient. With systemic radionuclide therapy the physiology of the disease provides a major contribution to the therapy ultimately resulting in the delivery of the radionuclide to the tumor. By using a radioactive material that will be delivered to the tumor by the patient's own physiologic processes, it is possible to deliver a large dose of radiation to certain tumors with a minimal amount of patient manipulation. The most commonly utilized forms of systemic radiotherapy performed in veterinary medicine include radioiodine (131I) for thyroid tumors and radioactive samarium (153Sm-EDTMP) for primary or metastatic bone cancer. Thyroid tissue has the unique ability to concentrate iodine. The nonspecific (by either oral or subcutaneous injection) administration of radioactive iodine to a patient with a thyroid tumor can result in the very selective delivery of a dose of radiation to that tumor. Similarly the intravascular administration of a phosphorus-like chemical (EDTMP), that is bound to a radioactive form of samarium (153Sm) can result in the delivery of a dose of radiation to bone tumors.

How is radiotherapy used at AVMI? 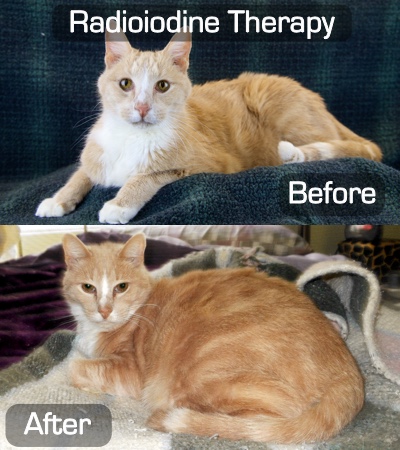