Meningiomas are tumors that arise from the thin membranous layer surrounding the central nervous system called the meninges. Specifically, primary orbital optic nerve meningiomas arise from the cap cells of the arachnoid surrounding the intra-orbital portion of the optic nerve. Meningiomas tend to occur in older animals.No breed or sex predilection has been noted in either dogs or cats.

Meningiomas of the orbit result in slowly progressive, unilateral vision loss secondary to the compression of the optic nerve. .

The unilateral vision loss caused by compression of the optic nerve by the mass often goes unnoticed in companion animals who continue to navigate normally due to unaffected vision in the opposite eye. Ultimately the growing mass leads to exophthalmos with absent retropulsion of the globe on physical exam.

MRI is the diagnostic imaging modality of choice for diagnosing most orbital disease. For facilities without MRI availability CT can be often be substituted with similar if less conspicuous findings. The diagnostic imaging characteristics of orbital meningiomas include a mass that demonstrates mild T2, FLAIR and STIR hyperintensity as well as uniform contrast enhancement and is centered on the path of the optic nerve. Occasionally variable sized cysts occur within the meningioma leading to a more heterogeneous signal and enhancement pattern. Meningiomas are generally isointense on T1 weighted images. Peripheral extension from the bulk of the mass along the surface of the dura, referred to as a "dural tail" is a common finding in meningiomas. Orbital meningiomas can extend caudally along the path of the optic nerve, into the optic canal and ultimately extend intracranially.

Surgical excision is the therapy of choice for meningiomas. The caudal extension of the tumor has profound implications on the surgical resectability. Meningiomas that can not be completely surgically excised can be treated with radiaition therapy. 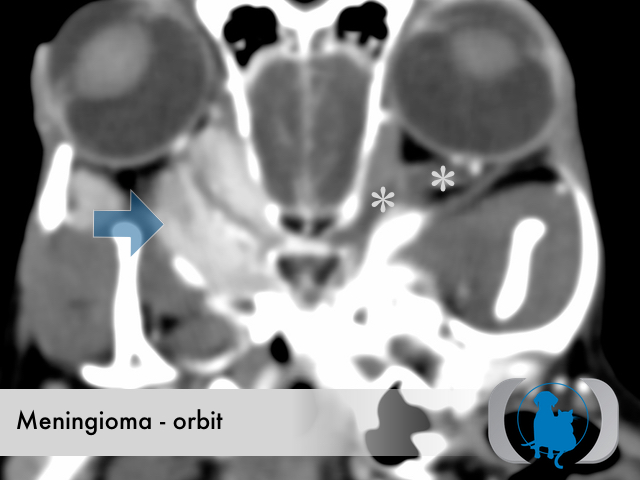 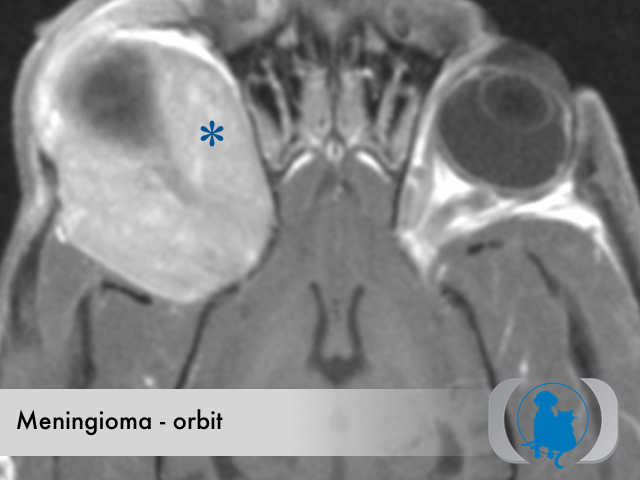 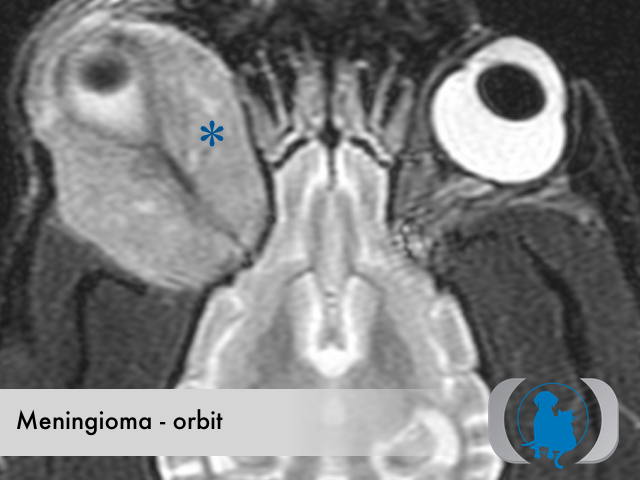