Meningiomas are tumors that arise from the thin membranous layer surrounding the central nervous system called the meninges. Specifically meningiomas arise from the arachnoid "cap" cells of the arachnoid villi in the meninges. Meningiomas are the most common brain tumor in both dogs and cats and tend to occur in older animals. In dogs, the Golden Retriever and Boxer were over represented in a previous report. In cats no breed predilection has been noted. No sex predisposition is noted in either dogs or cats.

Meningiomas result in various symptoms of neurologic dysfunction as the result of direct or indirect compression of the adjacent nervous system tissues. The essentially restricted nature of the cranium and spinal canal contribute to the symptoms caused by meningiomas.

The specific symptoms associated with any brain tumor are directly related to the location of the mass within the intracranial cavity. Seizures without other neurologic deficits are common in animals with meningiomas that compress the frontal lobes. Meningiomas compressing the brain stem may lead to various, often asymmetric symptoms depending on laterality and specific cranial nerve involvement. Meningiomas within the caudal fossa often directly or indirectly obstruct CSF outflow leading to the development of both hydrocephalus and increased intracranial pressure. A meningioma in any intracranial location will eventually lead to increased intracranial pressure as the result of a progressive mass effect. Meningiomas typical grow slowly potentially allowing them to become quite large before overt symptoms manifest themselves leading to the necessary diagnostic imaging tests (e.g., MRI or CT of the brain) that allow a definitive diagnosis.

MRI is the diagnostic imaging modality of choice for diagnosing brain and spinal disease. For facilities without MRI availability CT can be often be substituted with similar if less conspicuous findings. The diagnostic imaging characteristics of meningiomas include a broad based, intradural, extramedullary mass that demonstrate mild T2, FLAIR and STIR hyperintensity as well as uniform contrast enhancement. Occasionally variable sized cysts occur within the meningioma leading to a more heterogeneous signal and enhancement pattern. Meningiomas are generally isointense on T1 weighted images. Peripheral extension from the bulk of the mass along the surface of the dura, referred to as a "dural tail" is a common finding in meningiomas. The cranium adjacent to the meningioma frequently undergoes hyperostosis and sclerosis.

Surgical excision is the therapy of choice for meningiomas. The location of the tumor has profound implications on the surgical resectability. Meningiomas that can not be surgically excised can be treated with radiaition therapy. Hydroxyurea has been shown a potentially useful chemotherapy agent. 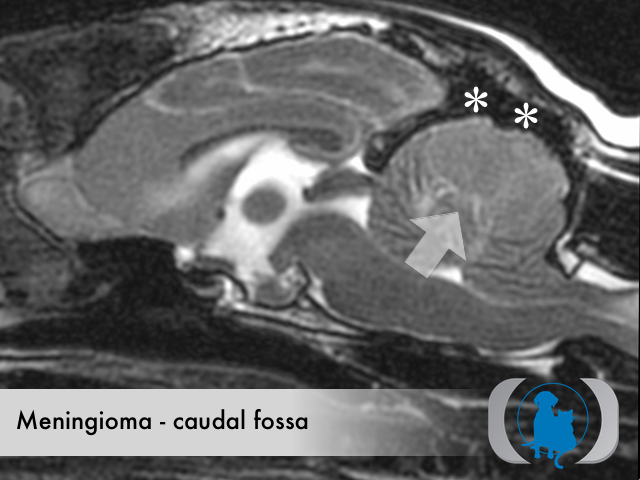 Sagittal T2 weighted image of the brain of a 15 year old neutered male DSH cat with a meningioma originating from the dorsal aspect of the caudal fossa (white arrow). Note the adjacent hyperostosis of dorsal calvarium (asterisk). 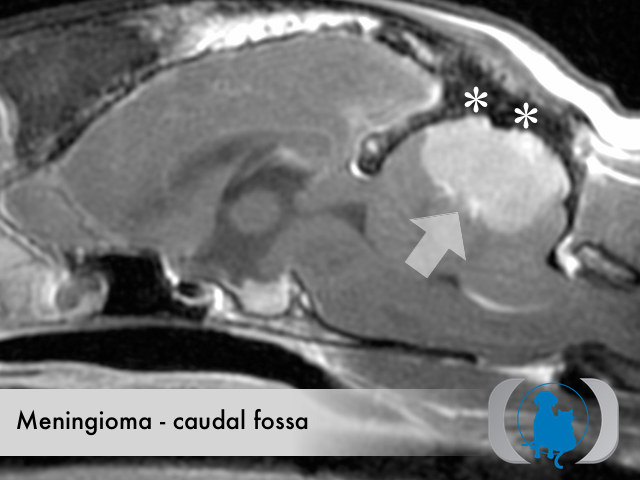 Sagittal T1 weighted image of the brain of a 15 year old neutered male DSH cat with a meningioma originating from the dorsal aspect of the caudal fossa (white arrow). Note the adjacent hyperostosis of dorsal calvarium (asterisk). 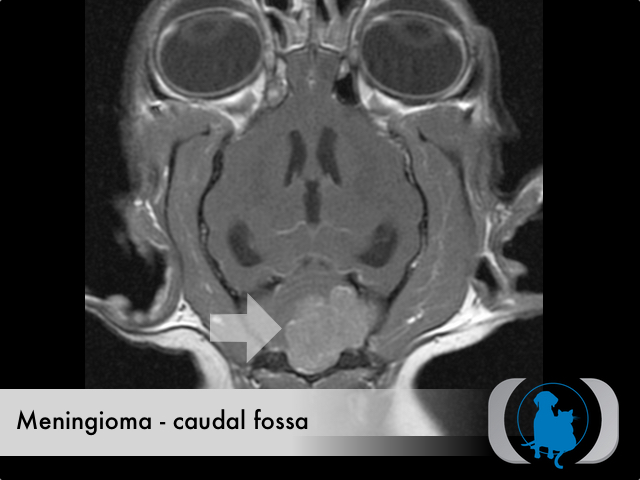 Dorsal T1 weighted image of the brain of a 15 year old neutered male DSH cat with a meningioma originating from the dorsal aspect of the caudal fossa (white arrow). 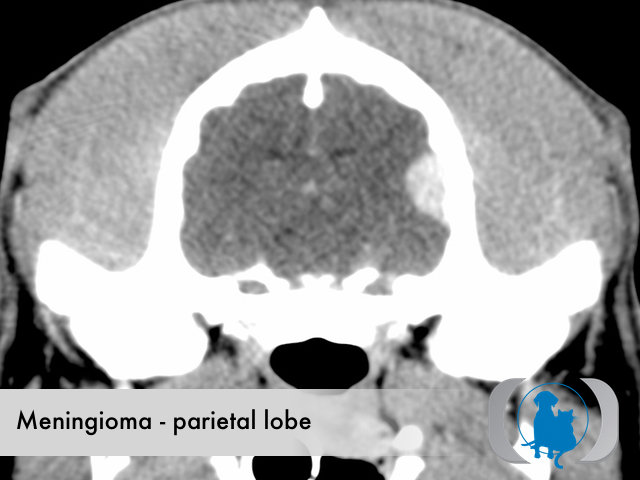 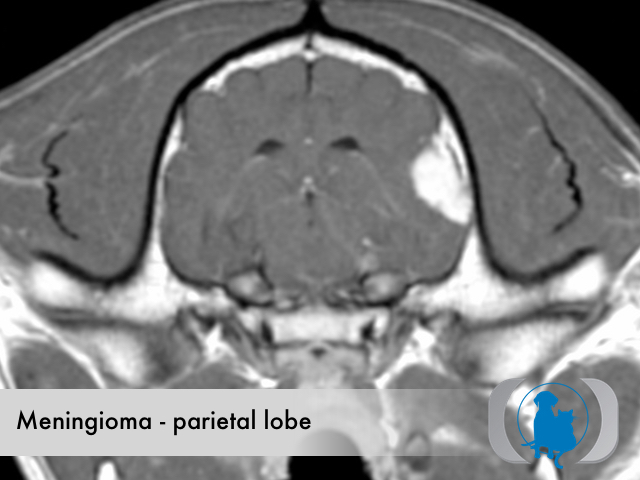 MR image of a 12 year old spayed female dog following the administration of iodinated contrast. Note the uniform contrast enhancement of the meningioma overlying the left parietal lobe. Note the improved visualization of the brain on MR imaging compared to the CT of the same dog above.