Phenotypic selection has led to variability in canine skull shape. The brachycephalic phenotype was selected initially for its strong bite force. Later, breeds with round heads and foreshortened noses were desired because their facial features resembled those of human infants. The external morphology of the dog head has subsequently been categorized into three types: Animals with long slender skulls and prominent noses, a large external sagittal crest and a narrow zygomatic arch were characterized as dolichocephalic, while dogs with a round head without a sagittal crest and with a braincase longer than the facial bones were classified as brachycephalic. The traits of mesaticephalic dogs lie between these extremes. Objective characterizations of skull morphology have because been performed and values relevant to the determination of canine skull shape were derived. Accordingly, the Boston Terrier, Boxer, Brussels Griffon, Bull Terrier, Pug, Shih-tzu, Bulldog, English Toy Spaniel, French Bulldog, Japanese Chin, Japanese Pug, Pekingese, Chihuahua, Maltese, and King Charles Spaniel would be defined as having a brachycephalic skull.

Caudal occipital malformation syndrome (the canine equivalent of Chiari type I malformation in humans) is attributed to a relatively increased cerebellar volume compared to the size of the caudal fossa. This mismatch leads to the herniation of the caudal part of the cerebellum through the foramen magnum attenuating CSF egress from the intracranial cavity. A significant number of clinically affected dogs have syringomyelia, which is a fluid-filled cavity within the parenchyma of the spinal cord. Pathogenesis of syringomyelia is uncertain but is thought to be related to abnormalities in CSF flow through the foramen. Normally the pulse pressure of CSF flow is equal to the pressure within the spinal cord, thereby maintaining a homeostatic environment. In Chiari I malformation in people obstruction of the subarachnoid space by the caudally displaced cerebellum is thought to result in a mismatch between the pulse pressure of the CSF and the pressure within the spinal cord. One current theory suggests that the cisterna magna functions as a shock absorber against the pulsatile CSF waves coming from the intracranial cavity. The loss of shock absorbing capacity of the cisterna magna leads to subsequent increase of central canal wall pressure. The transient increase in pressure within the central canal secondary to normal blood flow (e.g., water hammer effect) allows for distention of the parenchyma and tissue injury resulting in the development of a syrinx.

Obsessive scratching at the shoulders without contact with the skin is almost pathognomonic for dogs with COMS and syringomyelia. Other common signs include increased sensitivity around the head and neck, inability to tolerate a collar or grooming, and variable degrees of nonspecific pain, progressive tetraparesis, and tetraplegia.

Magnetic resonance imaging is the gold standard for diagnosing COMS. While CT can document the malformation of the cranium that contributes to the development of the syndrome, only MRI can adequately confirm the presence of both cerebellar herniation and syringomyelia.

Sagittal T2 weighted brain MRI of a Cavalier King Charles Spaniel. Note the herniation of the caudal cerebellum into the foramen magnum obstructing CSF outflow (white asterisk) and the dilation of the central canal of the spinal cord (blue asterisk). 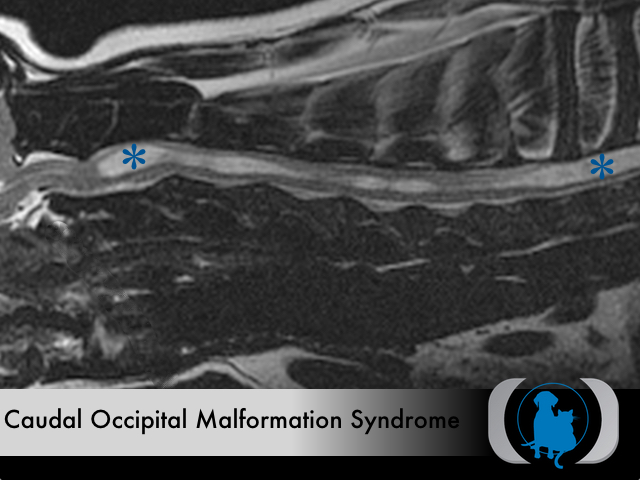 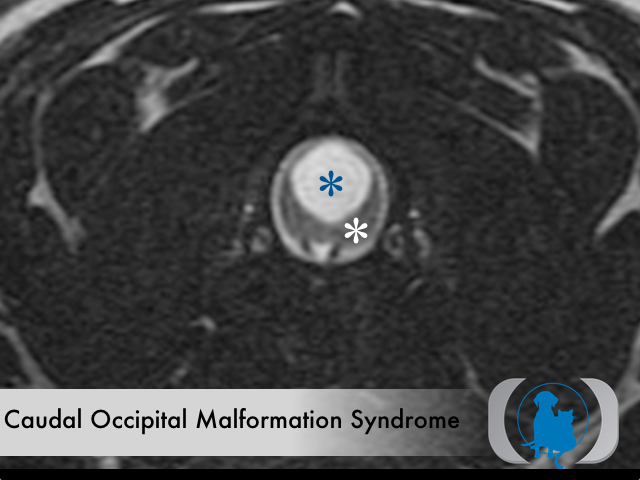 Axial T2 weighted cervical spine MRI of a Cavalier King Charles Spaniel at the level of C2. Note the marked dilation of the central canal of the spinal cord (blue asterisk) resulting in severe compression of the adjacent spinal cord (white asterisk) at this level.